I even thought about taking a picture of this massive squash I had purchased but thought that I had been taking way too many random pictures lately and decided not to. I think I learned to take those random pictures anyhow so I don’t miss sharing these things! For those of you who were in my kitchen to see it, you know it was quite large!

I LOVE squash! But this one was not for me; it was for making lots n lots of little lady food. I popped it in the oven for about an hour (whole and in a pan), cut it in half, removed the pulp, scraped out the flesh with a large spoon, mashed with a potato masher, added just a bit of water and puréed with an immursion blender. 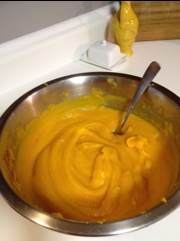 Thanks to my friend JenI was confident enough to make my own food for babes and store it for handy use! 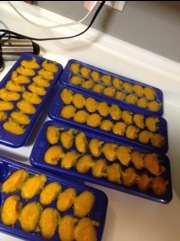 I spooned the puréed ‘skosh’ as we call it, into almost FIVE ice cube trays to be frozen. After they were nice and solid and popped them out and into a baggie for handy storage and access. Now for every meal I’m able to grab one or two cubes of squash and nuke it for 30 seconds. Viola! Little lady food! and she LOVES her skosh! 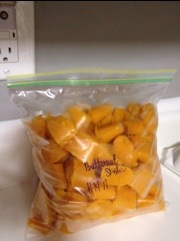